On a cruise to Africa and the Middle East, get ready to immerse yourself in new cultures and explore divine landscapes. Whether you’re after a trek across the Moroccan desert or you’re eager to catch some waves in Durban, the African continent has plenty to offer, delivering you a holiday of a lifetime. Alternatively, a trip to the Middle East will reward you with luxurious metropolises as well as quaint villages in the desert. No matter which region you choose to explore, you’re bound to have an unforgettable holiday!

Top Cruise Deals to Africa and the Middle East 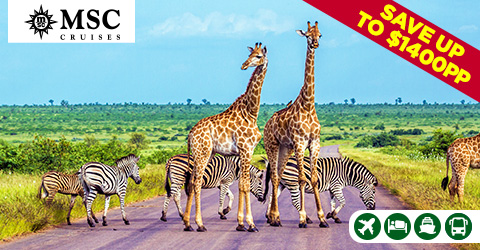 A Taste of Cruises to Africa and the Middle East

The African continent boasts incredible diversity in terms of cultures, languages, religions, and landscapes. Cruises to Africa are among the most varied in the industry thanks to this diversity. From the bustling cities in the north radiating with Arabic flair to the arid deserts and lush rainforests that dominate other parts of the continent, there is something for everyone on a cruise to Africa.

The unique assortment of stunning landscapes is enclosed by the Mediterranean Sea to the north, the Indian Ocean to the east, and the Atlantic to the west. And just like the natural landscapes and African cultures, the ports of call and shore excursions are varied, too! Whether you’re after an adrenaline-pumping safari trip to observe the big five game animals or a journey to the past on a tour of the ancient Egyptian temples, Africa has everything you’d need for an unforgettable holiday!

Considering the continent’s sheer size and diversity, we believe the best way to explore Africa is on a cruise. A comprehensive experience of the continent would be difficult to achieve otherwise. A benefit of going on a cruise is being able to enjoy carefully curated shore excursions while still having the opportunity of returning to a luxurious cruise ship after a day of authentic experiences and adventure.

Some cruises to North Africa start in the Mediterranean. These shorter cruises, sailing to destinations like Tunisia, Morocco, and Algeria, give travellers a colourful taste of the beautiful continent. Make sure you make a stop in the fabled Casablanca when you’re in North Africa. Egypt, to the east, is the gateway to the mystical Arab realm. Alexandria, Egypt, also known as the ‘Pearl of the Mediterranean’, is a city of history and knowledge.

If you’re on the lookout for breathtaking sights, Cape Town, South Africa is where you need to be. Africa cruises departing from Cape Town sail passed the stunning Table Mountain. Durban, on Africa’s south-eastern coast, never fails to impress both first-time cruisers and seasoned sailors alike!

Just off the south-eastern coast of Madagascar, the Indian Ocean island nation of Mauritius will give you that dose of tropical sunshine you’ve been craving. The island nation’s capital St. Louis is well known for its gorgeous port and exclusive resorts.

Cruises to the Middle East

A breathtaking tapestry of authentic experiences, the Middle East is a patchwork of Arab culture, golden history, stately architecture, and state-of-the-art technology. The Middle East is home to welcoming cultures and friendly locals, making cruises feel at home in a world away. Despite having endured several wars, the Middle East boasts a colourful past that can’t be seen elsewhere in the world. The region is a fascinating travel destination for those who are interested in the world, then and now.

The mouth-watering fare and intriguing cultural practices can be found throughout the region from the skyscraper-showcasing metropolises to the sleepy villages. The bustling city of Dubai is Middle East’s treasured gem, shining with affluence and luxury. The city never fails to impress travellers from around the world on the lookout for lavishness and high culture. If you’re looking for some peace and tranquillity, make way to the treasured, quiet villages dotting the arid Arabian desert. A Middle East cruise will transport you to the most exciting destinations in the Arab realm, introducing you to the region’s diversity and ways of life.

Cruise Lines with Cruises to Africa and the Middle East

We have many more great deals,
search online or call today to speak to a Cruise1st Australia specialist!