Combine breathtaking views of the Himalayas with golden temples, charming hillside villages and jungle wildlife and what you get is life changing holiday experience to one of the world's most inspiring destinations, Nepal. We've created a unique Nepal cruise and tour package that includes an escorted land tour of this immensely spiritual part of the world that offers a truly memorable experience like no other. 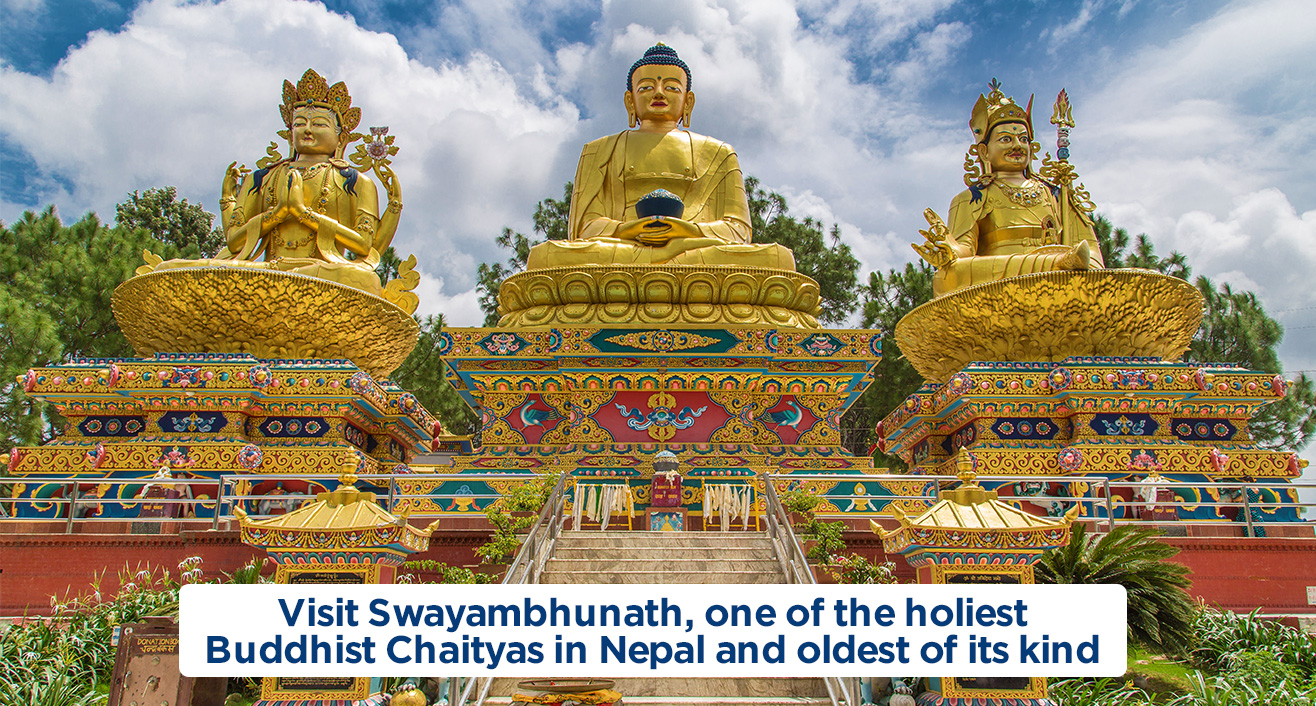 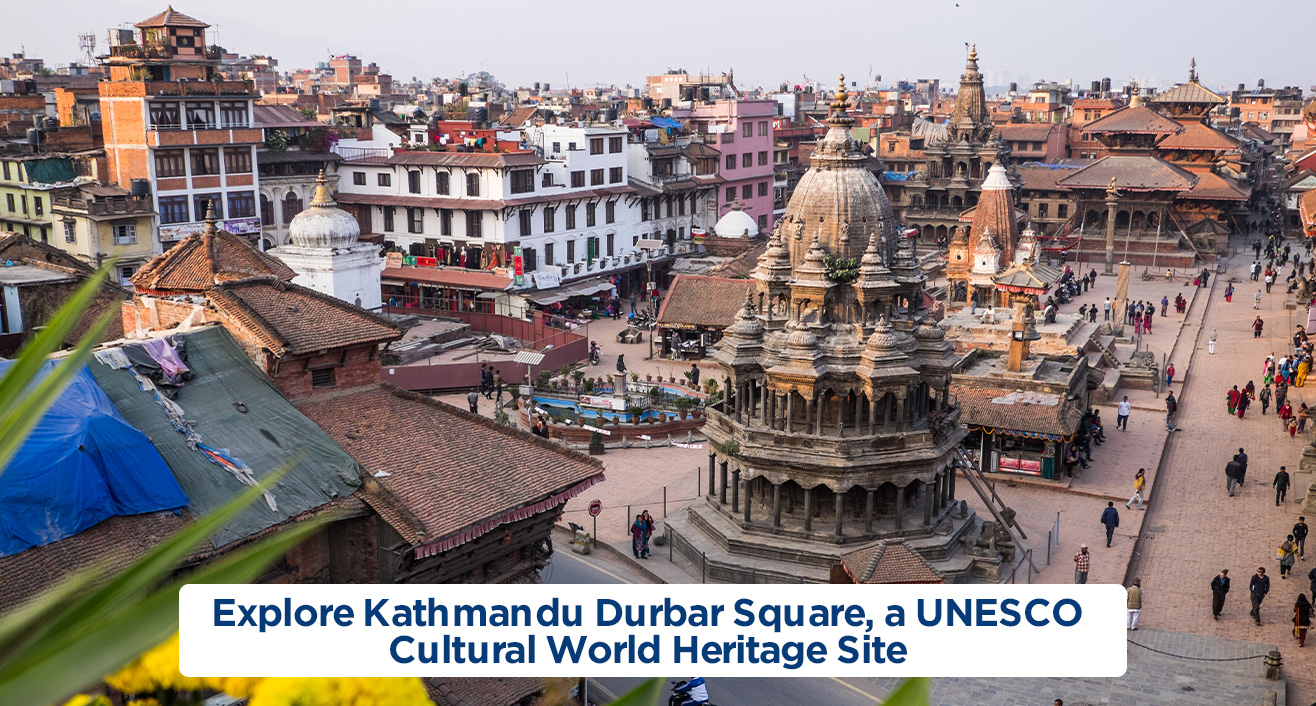 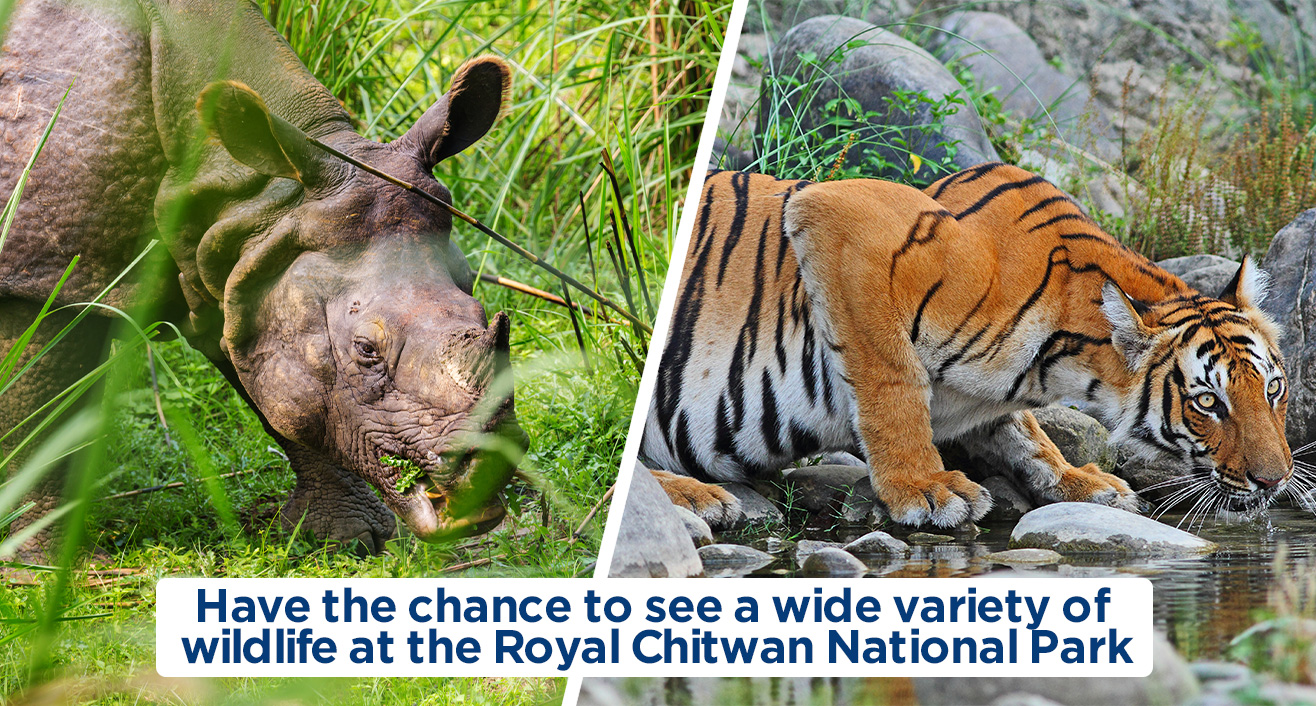 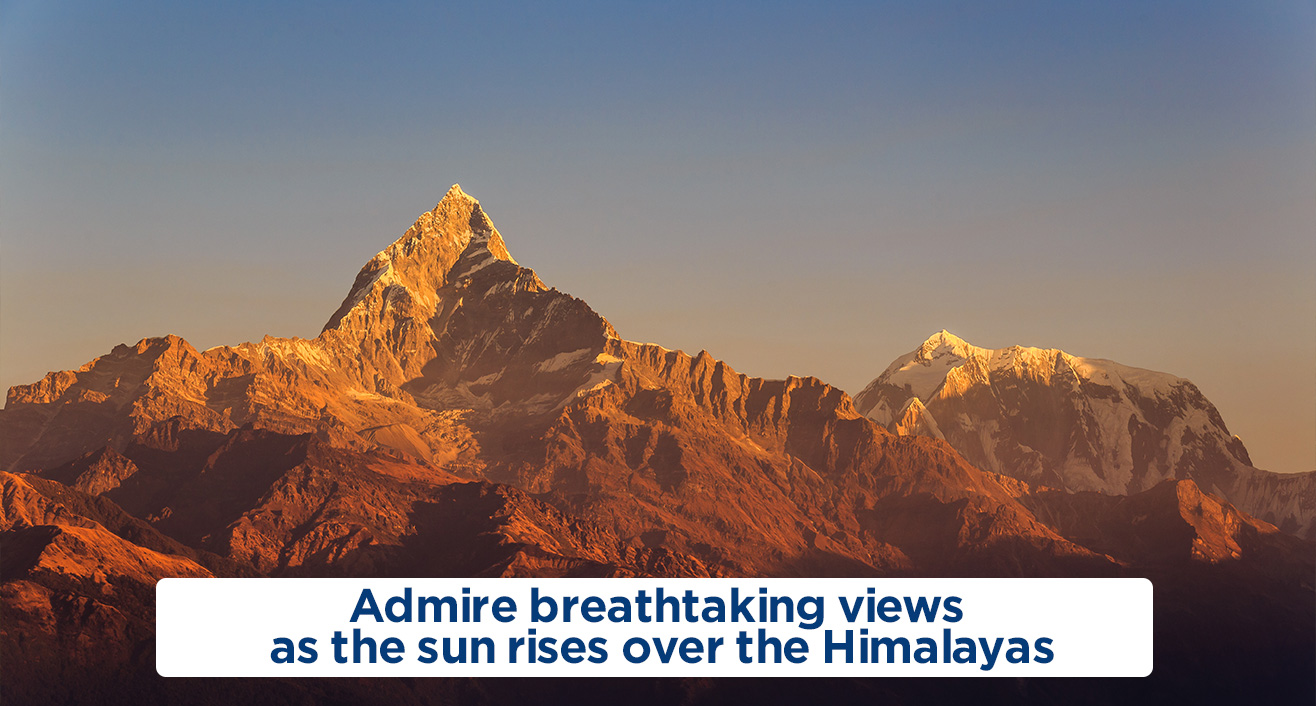 Kathmandu Durbar Square
Listed by UNESCO as one of the eight Cultural World Heritage Sites, Kathmandu Durbar Square is home to a cluster of ancient temples, palaces, courtyards and streets that date back to the 12th and 18th centuries. Your tour of Durbar Square includes a visit to the temple of Living Goddesses, the Hanuman Dhoka Royal Palace (the historic seat of the Royalty) and the magnificent Taleju Temple. The capital takes its name from the giant pagoda of Kasthamandap, which is said to have been built of a single tree. The Kasthamandap has been destroyed in recent massive earthquake and will take some time to rebuild it. It has been the main focal point of the city’s social, religious and political from the Malla kings.

Swayambhunath
Located west of Kathmandu, you'll be able to appreciate the ancient religious architecture of Swayambhunath, one of the holiest and oldest Buddhist stupas of its kind in Nepal. Also known as Monkey Temple this stupa is said to be 2500 years old and is composed of a solid hemisphere of brick and earth supporting a lofty conical spire capped by a pinnacle of copper gilt. Painted on the four sided base of the spire are the all seeing eyes of Lord Buddha. The hill on which it is set upon is also home to a mosaic of small chaityas and pagoda temples.

Patan
Next you will visit Patan a city of fine arts, also known as Lalitpur. The city is enclosed within 4 stupas, said to be built in 3rd century AD, by Emperoro Ashoka. The city retains an old charm with its narrow streets, brick houses and multitude of well-preserved Hindu temples, Buddhist monasteries (vihars) and monuments. Here you will visit the Shikahara style Krishna Temple built by King Siddhi Narsingh Malla and Hiranya Varna Mahavihar, a 3 storey shrine that dates from the 12th century, it is more affectionately known as the Golden Temple. Your day in Patan will end with a trip to the Tibetan Refugee Camp and the Handicraft Center, where you'll get a preview into the hand weaving of Tibetan carpets and moulding of metal statues.

From Kathmandu you'll enjoy a drive to Chitwan, South West of Kathmandu it is one of the few remaining undisturbed vestiges of the Terai region. The Terai region is a narrow lowland ecoregion at the base of the Himalayas comprising of Sal forest, tall elephant grassland, hills, flood plains of the Narayani, Rapti and Reu rivers. In Chitwan, you'll pay a visit to The Royal Chitwan National park, which is situated near the border to India, in the lush valley and foothills of the Churia Range. As the first National Park of the Kingdom, it is famous for a variety of wildlife especially the greater Indian one-horned rhinoceros and the elusive Royal Bengal Tiger. The park was listed as a Natural UNESCO World Heritage site in 1984 and covers an area of 932sq km. It is home to 56 species of mammals, 49 species of amphibians and reptiles, and 525 species of birds. You will embark on a truly one-of-a-kind wildlife adventure - highlights include the jungle safari on elephant back or jeep, bird watching, canoe ride and jungle walk.

Next up is a drive from Chitwan to Pokhara. You'll be able to enjoy some time at your leisure to explore Pokhara, a lake side walk is a must! A rare combination of snow-clad peaks and snow-fed lakes and rivers has helped to make the valley of Pokhara, it is one of the most picturesque natural attractions in the kingdom. The altitude of Pokhara varies from 780 m to 1350 m. It is located virtually in the geographical center of Nepal. Located on the main road between Kathmandu and Bhairahawa, there may be no other place in the world from where the peaks of the Great Himalayas can be admired from such a close distance. 3 of the 10 highest mountains in the world - Dhaulagiri, Annapurna and Manaslu - are all within a linear distance of 50 km from the city. Phewa Lake, skirted by a large numbers of unpretentious lodges and a simple restaurant, is the most congenial spot for visitors. Due to its proximity to the Annapurna mountain range, the city is also a base for trekkers undertaking the Annapurna Circuit through the ACAP region of the Annapruna ranges in the Himalayas. The city offers a combination of nature and culture and is mostly known as the gateway to the trekking route “Round Annapurna”. Pokhara is also home of many Gurkha Soldiers.

Sarangkot
An early morning visit to Sarangkot will give you a chance to view the sun rise over the Himalayas (if weather permits), as the day progresses clouds tend to gather around the mountains. Sarangkot offers breathtaking panoramic views of the Annapurna Mountain Range. Situated very close to Pokhara, it is a semi-developed village located on a hilltop, here you'll be able to take in 360 views: Pokhara and Phewa lake lie to the south, the grand Annapurna panorama lies to the north, rolling hills lie to the east and to the west offers a distant view of Mount Dhaulagiri.

Bindhyabasini Temple
En route to your hotel you will visit the Bindhyabasini Temple, one of the oldest temples in Pokhara. Legend says that when Pokhara was a part of Kaski Kingdom, the main deity of the temple, Goddess Durga, was brought from India. Apart from the peace and tranquility that can be felt in this region, the premises of the temple offers a good view of the Himalayas on a clear day. Also nearby is the old Pokhara Bazaar.

The Seti Gorge is a mysterious wonder of Pokhara that originates from the Machapuchhare glacier. The Seti (meaning 'white' in Nepali) River runs through the main city area and the best place to catch the glimpse of the Seti River is at the park just north of Old Pokhara near the Gurkha Museum.

Davis Fall is a unique waterfall that lies near Pokhara city. The water falls directly into a deep, narrow and seemingly endless canal. It is believed that this deadly waterfall took the life of a tourist named David, who fell down into the canal and was never found, and hence the name David waterfall, named in his memory by the people of Pokhara. This place has many nicknames, like Davy's fall, David's fall or Davis's fall.

The Gupteshwor Mahadev Cave is well known as one of the longest and most attractive caves in south Asia. Located in a pristine location in northwestern Pokhara, it is a world famous tourist destination in the Gandaki zone and Kaski district. In the 80s, a British expedition organisation published a detailed piece about the cave in the 'Atlas of the Great Caves of the World'.

Following the Chinese invasion of Tibet over 300,000 were exiled. It's estimated that 60,000 settled in Nepal. 2,500 refugees cross the border every year either to make their way to India or settle in Nepal. There are 12 official containment camps, 8 in Kathmandu and 4 in Pokhara (Tashi Ling, Tashi Palkhiel, Jampaling and Paljorling). There are several smaller settlements in the surrounding hillsides around Pokhara.

The Fewa (or Phewa) Lake is 1.5km long and takes its place as the second largest lake in Nepal. Offering an excellent view of the mountains and their reflections on the lake, it is a magnet for lakeside tours and treks. One can easily find a place to sit back, relax and enjoy a great meal while enjoying the scenery here. You will also enjoy a 1hr boat on the lake. Most of the lakeside hotels and guest houses have traditional designs and layouts which reflect the natural surrounds.